The Best CPD ever - MathsConf

La Salle Education have been hosting MathsConf's since June 2014, MathsConf1 in Kettering. So I was relatively late to the game when I went along to my first one in 2018. I forget now where I first heard about MathsConf but now I can't imagine not attending one. I think I'm possibly at the point now where the distance wouldn't bother me either; Glasgow or Lower Dicker, I'd be there!

I'm sure there are some maths teachers that work with people who are just as 'geeky' as they are about maths and maths CPD, but I didn't at the time. So, as a lot of people tend to do, I went to my first MathsConf on my own. At the start of the conference a common question asked of the delegates during 'Morning Assembly', which is where all delegates gather for an initial welcome and presentation by CEO and founder of La Salle Education, Mark McCourt, is "hands up if you've come to the conference on your own today" and a large number of hands do go up. So it appears attending conferences solo is quite a common occurrence. 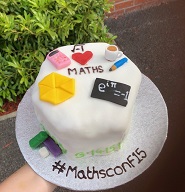 MathsConf also hold a maths cake competition at every event. I like baking and often bake my children's birthday cakes so I thought I'd have a go and what better way to feel more involved in the day than to enter into the cake competition. Spoiler alert: I didn't, and still haven't yet (despite coming close at the virtual mathsconf23), won the cake competition. Nevertheless it was a nice conversation starter as I collected my delegate bag and badge as I entered the conference.

The badges are great because they remind you which workshops you have selected to attend for each session during the day. Inside the delegate bag is also a treasure hunt card. Each exhibitor has a maths puzzle on their stand and solving the puzzle gives you a letter for your treasure hunt card. A completed card is entered into a prize draw to win , usually, an amazon fire tablet! I've never won one of these either! But it's the taking part that counts and who doesn't love solving maths puzzles?

A tradition of MathsConfs during the morning gathering is 'speed dating' which may sound intimidating but I've picked up some really good ideas during this. The idea is that you go and sit next to someone you haven't spoken to before and share a favourite resource or teaching tip and they share something back. I've learnt about how maths is used in teaching Dyson hoovers to recognise voice commands and the maths behind the latest innovations in car air-bag deployment!

Between the sessions there are plenty of refreshments, the legendary tuck shop ran by Rob Smith (@RJS2212) and during lunch, which is usually fabulous, there's a 'tweet-up' run by various recognisable faces from the maths twittershpere and usually an opportunity to build a pringle ring, hosted by me the last couple of times. 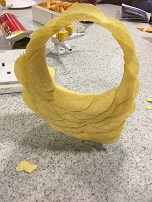 I am not going to try and write individually about the workshops I attended as it's been a while now and five (plus 1 virtual) conferences further down the line now I struggle to remember which workshop was form which conference! Thanks goodness I now sketchnote! So I will just say that the rest of my first MathsConf was fabulous and I came away with so many fantastic ideas for my lessons and so began the start of my addiction to MathsConf.

It took until my third MathsConf (#19 in Sheffield) before I decided to brave the (legendary) Friday night pre-conf drinks. I'm not sure why I was nervous as everyone was really friendly and welcoming. We played a few games of 'Set' and 'Albert's insomnia', you know, what most people do when out for drinks on a Friday night right? The best thing was that in the morning I no longer had to walk in or wander around the conference alone as I met some lovely people that night.

The freebies are pretty good too. All except the two calculators (which I got for entering a calculator-themed cake) in the picture below came from one conference but I know other who manage to get far more! My favourite freebie was an OCR rubix cube (which Adam (@AMercerMaths) kindly got for me as I was too affriad to ask!), close second is the famous AQA wooden ruler! The conference sessions are excellent. High quality CPD delivered by great people, and you often get to play around with manipulatives too. 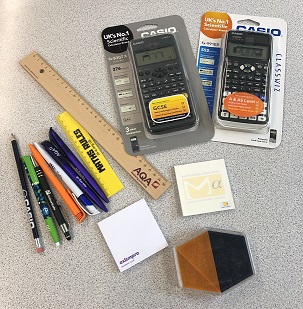 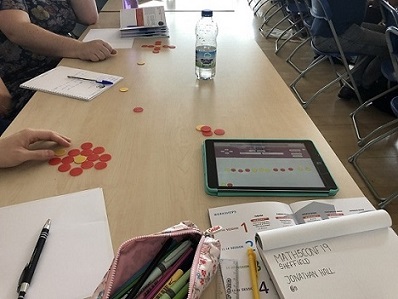 The most recent conference was, of course, a virtual one and although I missed 'seeing' everyone it was still as fantastic as ever. It was even more amazing that all of the sessions were recorded and so I didn't have the usual dilema of making difficult choices as to which workshop to attend. If you want to check out the sessions you can find them here. We did still manage to keep some of the face-to-face festivities by running a zoom social chat after the virtual quiz ran by Rob Smith had finished where we stayed chatting until the small hours and the next day the zoom social room was open all day for people to pop in and out of between conference sessions to try and give that opportunity to chat to fellow delegates still.

I can't wait to get back to face-to-face conferences but until then I'm really excited for another virtual one in just a couple of months time. If you want to soak up some of the best maths CPD around from the comfort or your sofa/bed/garden etc then go get a ticket here now.

I hope that this blog post has given you a flavour of what MathsConfs are all about and why I like them so much.