I've recently shared a set of questions on twitter which I have put together because I was struggling to find anything which would promote method selection and encourage students to make links between other 'topics' in mathematics. In this blog I wanted to go into a bit more detail about what prompted me to put together the questions and the thought process behind my choices.

In March 2019 I watched a presentation by Mark McCourt (@EMathsUK) at ResearchEd Blackpool entitled 'Phasing Learning'. Since then I've read Mark's book, Teaching for Mastery, and taken part in several webinars hosted by La Salle Education, some of which focussed on the phases teach, do, practise and behave. Although my understanding is still developing I think what I have implemented in my practice and learnt so far may be of use to some, hopefully! 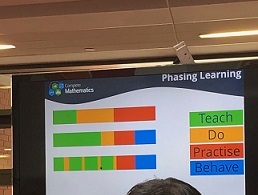 Until recently I had been a fan of using the beginning 10 minutes of each lesson to get students working on some kind of mixed topic starter, retrieval practice if you like, I would call them 'do now' tasks. I'm not saying I never use this sort of thing any more, I'm not in my room sometimes just before teaching a class and it can be useful to have something for the students to get started on while I set up my lesson and resources, I just try to do this less often. This is because I think there may be a better time to get students to practise retrieving prior knowledge and I currently think the practise phase of a learning episode is a better time for this. To explain why, let's say you've just taught students about ratio and once they're fluent with the ideas you want them to grasp you give them a set of questions, some are really tricky and some even interweave other skills such as percentages and fractions but are ultimately about ratio. Students have both recency (you've JUST taught this thing) and cue (you've said "here's some ratio problems to try") so students don't need to 'method select' and that's a rather important skill. I decided that I wasn't really happy that the only time students got to practise selecting the correct method was during a quick 'starter' activity or when they do a test, mock exam, or the odd SSDD (Same surface different deep, examples here) problem.

What I've created and collated so far is far from the finished article but, having tried this in lesson, I feel confident enough to share and get people's thoughts and ideas, perhaps even inspire others to create similar things. What I hoped to achieve with my first attempt at this ('Y9' Straight line graphs - PDF available from my resources page) was to give opportunities for student's to practise method selection, make links to other areas of their previous learning in mathematics and practise unrelated skills too.

I have been really impressed with the way my class took to this series of questions and their discussions during it were really encouraging. It was nice to hear comments such as "Oh, so sequences are a bit like linear graphs then". I shall perhaps write more on how I've tried to implement this phased approach (teach, do, practise, behave) in my teaching but this will do for today.